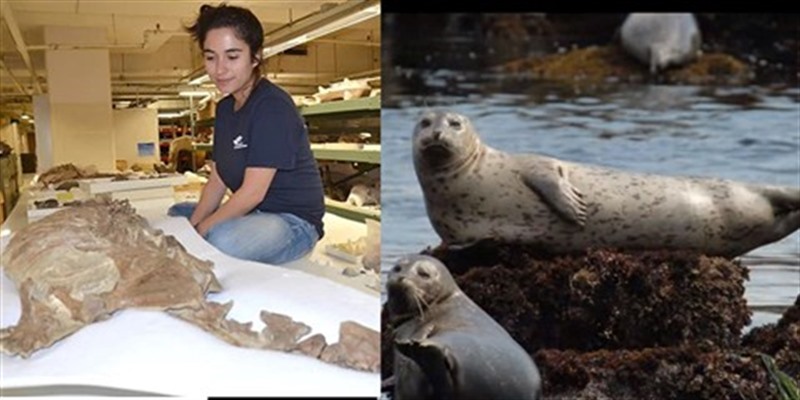 A Palaeontologist is a Detective of the Past—Ana Valenzuela Toro

Science is all about unlocking mysteries and advancing knowledge. And sometimes the answers to those mysteries help us tell newer, more accurate stories about the distant past—and the creatures that inhabit the world we live in now.

Take the enigmatic case of the fossilized elephant seal from Indiana.

No one would expect to find this sort of creature—particularly a type native to the southern oceans—to end up in the middle of the North American continent, biologist and palaeontologist Ana Valenzuela Toro explains. How did it get there?

First off, Ana points out, palaeontologists don’t just study dinosaurs—they scrutinize all sorts of creatures, including Ana’s speciality, marine mammals. She notes that elephant seals are extraordinary ocean navigators who spend up to 90 percent of their time at sea.

The fossilized skull of the adventurous seal who swam to the midwestern U.S. was discovered in 1965 near the Wabash River in Indiana. Decades later, scientists were able to show that the skull was definitely an elephant seal—a bold creature who crossed the equator from the southern hemisphere, entered the Mississippi river system, and found its way to its surprising destination.

It was the most extreme freshwater incursion of a pinniped—a category of marine mammals that includes seals, walruses, and sea lions—ever recorded. And it showed that marine mammals don’t have physiological limits that confine them to ocean habitats.

Ana also discusses a mysterious fossil whale graveyard in the South American desert, the joy of collaborating with other scientists, and practical tips for young women pursuing a career in science.

Ana is a Chilean paleobiologist pursuing her Ph.D. in Ecology and Evolutionary Biology at the University of California Santa Cruz. She also is a Peter Buck Predoctoral Fellow at the Smithsonian Institution’s National Museum of Natural History and a National Geographic Explorer. Ana is broadly interested in the ecological and evolutionary history of marine mammals. Specifically, her research explores how pinnipeds (the group that includes seals, fur seals, sea lions, and walruses) have evolved and maintained a semiaquatic lifestyle, breeding on land but foraging in the water, over the past ~30 million years.

In addition to her research, Ana is enthusiastic about eradicating colonialism and racism in science and making science and education more inclusive. She is a fellow at the Clinton Global Initiative University by the Clinton Foundation, where she is committed to advancing actions to grant equity in education to underserved students.