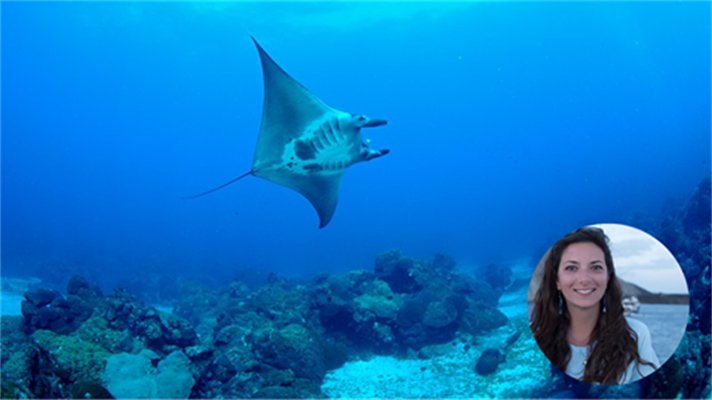 Growing up in the Italian Alps, Tania Pelamatti developed a love of nature, but she had to explore a different environment before she found her true passion. “When I started SCUBA diving, I discovered this amazing new space,” she remembers—and that space inspired her.

Tania describes multiple encounters with underwater wildlife, but says one changed her life forever. Sharing a picture of fish swimming in front of her, she indicates the outline of a whale shark that approached her. This was the encounter that encouraged Tania to become a marine biologist and help ocean creatures. She made her choice, enrolled, and eventually found herself in the waters off Baja California, working with fisherman and handling live sharks. At one point, she was able to help remove a net from the species that inspired her—a whale shark.

Later, in the waters near Revillagigedo Archipelago, Tania encountered her first manta ray, and decided that was the species she wanted to work with. Impressed by their need to filter hundreds of gallons of seawater per minute to feed on plankton, she began to question what else they might be ingesting—such as plastics. She conceived of her PhD project, collecting and analyzing plastics and microplastics from manta rays’ habitats in the middle of the Pacific Ocean. “We got surprised because

In the middle of the ocean, in these remote islands, we found a lot of plastics,” she says. “Plastics reach every corner of our world.”

Tania is a marine biologist and National Geographic Explorer who is dedicating her PhD project to the study of manta rays and their possible interaction with plastic debris. She grew up in Italy where she studied biology and holds a master’s degree in marine biology. She left Italy in 2014 to develop her master’s thesis at the Centro Interdisciplinario de Ciencias Marinas (CICIMAR-IPN) in Baja California Sur (Mexico), focused on elasmobranch’s reproductive biology. During her internship in Mexico she became very passionate about sharks and rays, and realized how vulnerable they are to human pressure, habitat loss and ocean pollution. After an amazing encounter she had with oceanic manta rays in the Pacific Ocean, she decided to continue her studies focusing on the threats they are facing in our changing oceans.

The virtual festival had one simple goal: celebrating incredible women, and doing incredible things around the world, day in and day out. We’re sharing these videos from the festival so you can meet scientists, explorers, conservationists, filmmakers, photographers and more, showcasing their work, challenges, adventures, research and expeditions.

Image description: A manta ray swims through the Flower Garden Banks National Marine Sanctuary in the Gulf of Mexico, portrait of Tania Pelamatti.