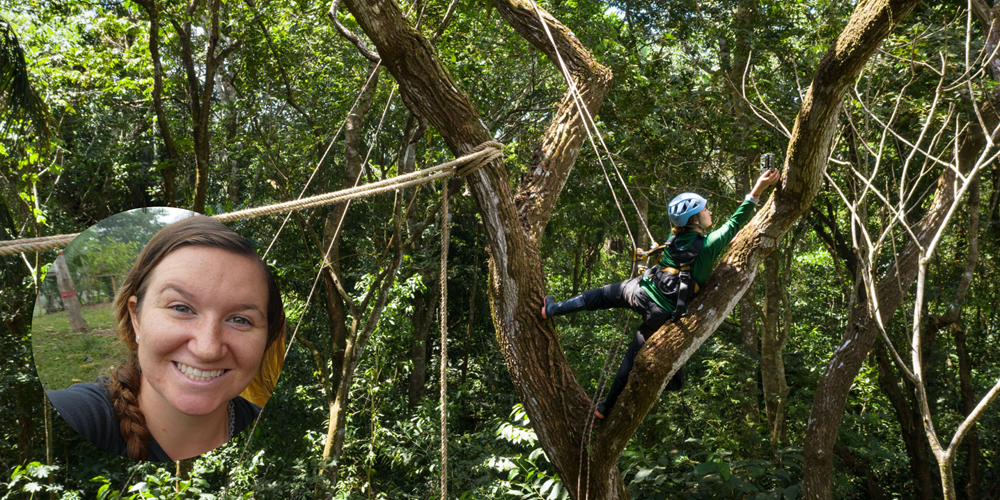 In the remote southwest region of Costa Rica sits small-but-important slice of geography—Osa Peninsula. Though a mere thousandth of a percent of the earth’s total surface area, this rainforest nevertheless houses 2.5 percent of the planet’s biodiversity. The non-profit organization Osa Conservation is dedicated to keeping it that way.

Wildlife Monitoring Program Coordinator Eleanor Flatt helps further Osa Conservation’s mission. Having lived and worked in rainforests for six years, she calls in for her virtual presentation from a location she’s used to—up a tree. That’s where she and fellow coordinator Dr. Carolina Pinto do their most important work. It’s “always where you’ll find us—up in the canopy. It’s not a bad way to spend a Saturday,” Eleanor quips.

Eleanor and Carolina are working to protect Osa wildlife from one of the biggest threats they face—roads. They break up the forest, making it difficult for wildlife populations to move through, and possibly causing roadkill. The challenge is especially great for tree-dwellers, says Eleanor, because they can’t simply walk across. Some become stuck in one forest patch, which can be harmful or even fatal.

Arboreal bridges are “a proven tool to combat this conservation challenge,” says Eleanor. Installed in the canopy, the artificial structures provide a safe path for tree-dwelling mammals to move from one forest patch to another, where they can access other food sources and habitats with sleeping areas. Additionally, she says, this ensures interactivity and allows for genetic diversity.

Eleanor shows off a bridge—a double rope crossing, one of five designs they are testing—and waits to check the camera trap to see which species have used it during the past three months. Ultimately, she wants to see sloths, anteaters, and four local breeds of monkeys using the bridges, but only one breed of monkey has used it so far.

While the project has seen early success, with eight species using 13 bridges, time is a challenge—it can take five years for some animals to trust the artificial constructs. How can they entice more species to cross sooner? Carolina might have an answer as she addresses the virtual audience—be sure to check out that summary and the video!

Eleanor is wildlife biologist working in the rainforests of Costa Rica. She's the Wildlife Monitoring Program Coordinator at Osa Conservation. In 2018, Eleanor was named an Elodie Sandford Explorer by the Scientific Exploration Society.