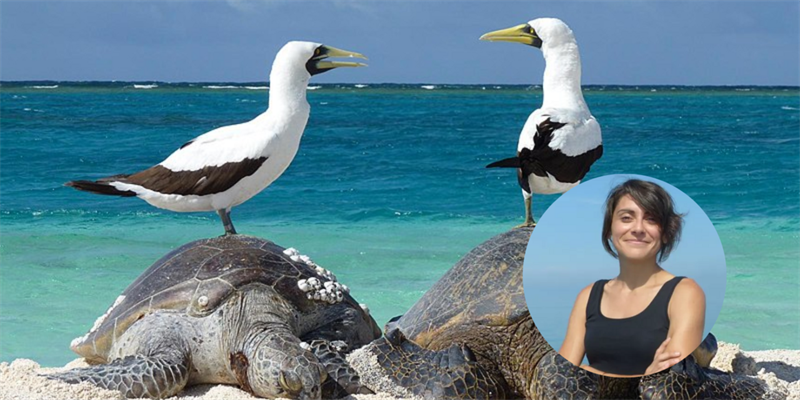 Martina Capriotti always had a passion for the sea, having first seen it as an infant in Italy’s San Benedetto del Tronto, on the coast of the Adriatic Sea. She became a lifeguard and SCUBA diver in her teen years, and was mesmerized by the abundance of life under the sea. “But you know, when you go underwater, it’s also very common to find the human footprint,” she says. “A lot of debris, a lot of pollution.”

This drove her to study ocean pollution. She focused on chemical pollution, particularly persistent organic pollutants—those that live for a long time in the marine environment and accumulate in living tissues. Working on her Masters in Norway, she studied endocrine disruptors, which disturb the hormone systems of living organisms. Continuing this research for her PhD, Martina also became involved in rescuing and releasing sea turtles.

Post-doctorate, Martina embraced the research of microplastics—tiny particles with an ever-increasing concentration in the world’s oceans, that carry toxic compounds and are ingested by sea animals. She returned to her beloved Adriatic coast to study pollution and microplastics on a National Geographic grant before moving to the U.S. to study suspension feeders—animals like mussels and sea squirts, or tunicates, that filter seawater in order to feed. Their filtration can affect the marine environment and its biodiversity. Martina says it is heartbreaking to see human actions on land threatening undersea lives, exclaiming, “When you’re underwater and you see these scenarios in front of your eyes, you say, ‘Oh my God, what are we doing to our planet?’”

Martina Capriotti is an Italian marine biologist and SCUBA diver, born and grew up along the Adriatic Sea coast, where she developed a deep passion for the sea. During the first research years, she focused her studies on chemical pollution and its effects on marine organisms. Thanks to a National Geographic grant, she investigated microplastics and chemical pollution in the Adriatic Sea. She has been awarded one of the 3 SKY Ocean Rescue Scholars in Europe for this project. She is currently a Postdoctoral Researcher at the University of Connecticut, where she directed her research interests on investigating how marine filter feeders interact with the ecosystem. As National Geographic Explorer she co-founded the National Geographic Explorers HUBs of New England and Italy. She also launched an environmental campaign called "Sea Rescuers Against Plastic" in the Italian Federation of Aquatic Rescue (FISA).