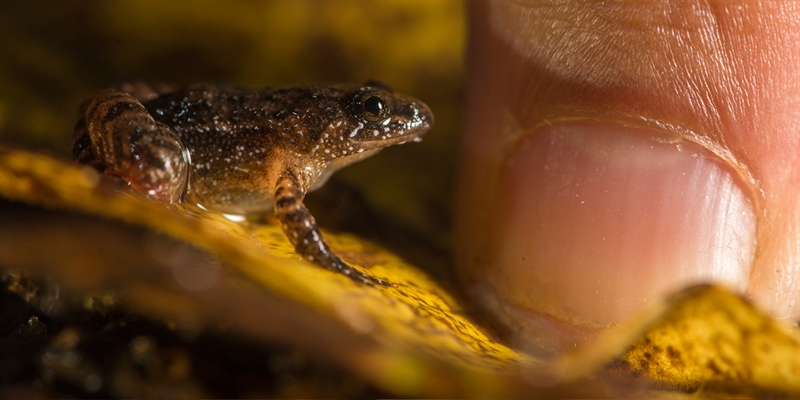 Tiny Frogs on the Skyislands of India

We’re hosting a series of Field Experts, a few rock stars in their chosen STEM fields, to take us along as they study the world.  We welcome Prasenjeet Yanav as he introduces us to a very tiny frog and the remote ecosystem of the Skyislands in India.

It was raining the entire day, and my biologist friend and I were drenched to our core. After walking in the undulating grasslands for hours, we finally reached a particular forest patch. It was almost dark and the forest was as tiny as a small auditorium. We turned on our headlamps and walked inside.

After crossing two tiny streams, my friend said, “Stop, do you hear that sound?” I tried to focus and listen to this particular call in the clutter of sound made by raindrops falling on the leaves. After a bit, my mind identified the pattern, and I suddenly started to hear the “Tiktik tiktik tiktik.”

We were happy as we had found the frog that brought us to that mountaintop. The frog was making this sound hiding into the leaves and, because of its small size and incredible camouflage, it took us more than two hours to actually see it so I could take a photo.

Nyctibatrachus minimus is one of India's smallest frogs and is found only on a few mountains in the Western Ghats. Like this frog, there are many species found only on these mountaintops and nowhere else in the world. The question was, why and how?

To find the answers, I collaborated with Dr. Robin Vijayan, an evolutionary biologist, and a bird ecologist. While reading his research, one term came up often: Skyislands. Skyislands are mountains that peek out of the clouds high in the sky. Just like oceanic islands, the Skyislands are isolated from each other. But instead of water, clouds surround them over deep valleys, which over millennia have become barriers for small species like amphibians, reptiles, insects, and little birds. They are home to a unique forest grassland complex known as the Shola-Grassland complex and all the major rivers in south India originate here. 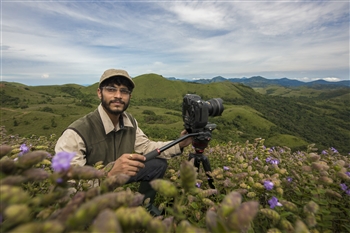 Dr. Robin's study found that most of these mountaintops are home to species found nowhere else in the world. While working on these mountains, he described three new species of birds found on three different mountain tops of the Western Ghats of India. After genetic studies, he found that all these birds belong to the same genus and evolved as separate species due to the isolation caused by these deep valleys. The natural barriers of the Skyislands stopped these birds from mixing together. They are now distinct and unique, just like our tiny frog. Dr. Robin's research on these mountaintops is ongoing, and so is my search for these beautiful and special species found only in the Skyislands.

Prasenjeet Yadav is a molecular ecologist turned photographer and a National Geographic Explorer. He holds a masters degree in molecular biology and has pursued research in molecular ecology at National Centre for Biological Sciences in Bangalore, India. Prasenjeet’s previous projects helped shed light on sensitive issues such as climate change and the effects of windmills on surrounding ecosystems. He is represented by National Geographic Creative and is currently working in Central Asia's high mountains and the Western Ghats of India. You can check out Prasenjeet’s photos here.